Reason of Occultation of 12th Imam – Fear of being Murdered!

In the tradition of Zurarah this same cause is mentioned by the Imam that: “For the Qaim (a.s), there is an occultation before his reappearance.” Zurarah immediately asked, “What for?” Imam replied, “For fear of being murdered.”

Shaykh Tusi says: “The cause of the obstacle in the reappearance of Imam Mahdi (a.s) is nothing but the fear of being killed. Because if there had been any other reason, his remaining in occultation would not have been justified.”

So let us check together history.

The Fatimid Caliphate or al-Fātimiyyūn Shi’a caliphate first centered in Tunisia and later in Egypt that ruled over varying areas of the Maghreb, Sicily, Malta,the Levant, and Hijaz from 5 January 909 to 1171. That’s mean they ruled 262 years! No doubt that shia Mahdi would be most welcomed quest in that shia caliphate during these years. But, he didn’t appear.

The Safavids ruled Iran and around countries from 1501 till 1736.  235 years of powerful shia ruling. But 12-th imam still didn’t appear.

As we seen Tusi said that reason of his going into the ghayba: is nothing but the fear of being killed.

Does that fear still exist?

141 / 5 – قال أبو جعفر: وحدثنا أحمد بن منصور الرمادي قال: حدثنا شاذان بن عمر قال: حدثنا مرة بن قبيصة بن عبد الحميد قال: قال لي: جابر بن يزيد الجعفي: رأيت مولاي الباقر (ع) وقد صنع فيلا من طين فركبه وطار في الهواء حتى ذهب إلى مكة عليه ورجع فلم أصدق ذلك منه حتى رأيت الباقر (ع) فقلت له: أخبرني جابر عنك بكذا وكذا فصنع مثله وركب وحملني معه إلى مكة وردنيMarat ibn Qubaisat ibn Abdulhamid said that: Jabir Bin Yazid Al-Jafee said to me: “I saw that my master Al-Baqir (alaihi salam) had made an elephant from clay, and he sat over it(rode it) and flew in the sky to Makkah and came back to me”. So I (Marat) didn’t testify this from him (Jabir) until I saw Al-Baqir (alaihi salam) and I said unto him: Jabir told me about you about such and such things. And he did similar (elephant) and sat on it and took me with him to Makkah and returned me. 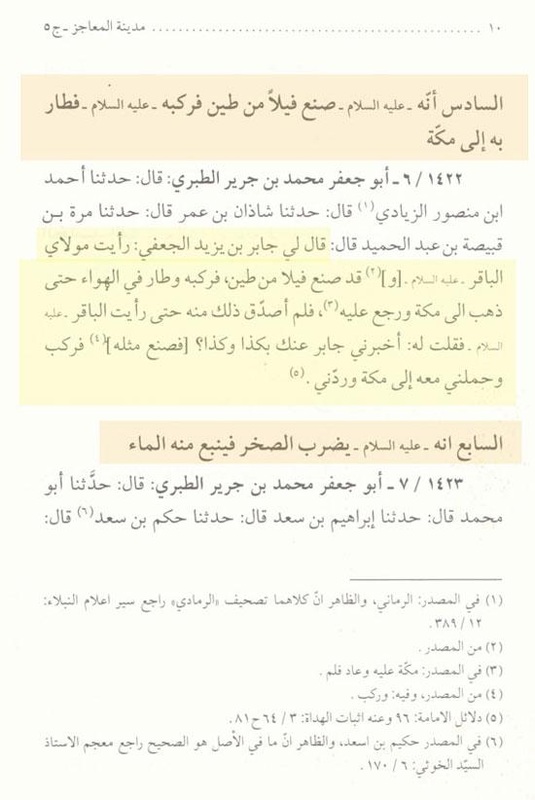 Exposing Shiism/ Shiite Creed of Disbelief and Quluw : Allah speaks in the TONE of Ali (Nauzubillah)!

“`Abdullah ibn `Umar has reported: The Messenger of Allah was asked: In what tone did the Almighty God speak to you on the night of ascension (Mi`raj)?

The Holy Prophet said: He addressed me in the tone of `Ali!

God said: O Ahmad! My truth is different from that of other things! I can neither be compared with people nor am I described with similar things! I created you from my light and `Ali from your light.

Thereafter I became aware of the secret of your heart, finding out there was no one closer and more beloved to your heart than `Ali.

Hence, I addressed you in the tone of `Ali so that your heart will be put at rest in this assembly of friendship.” 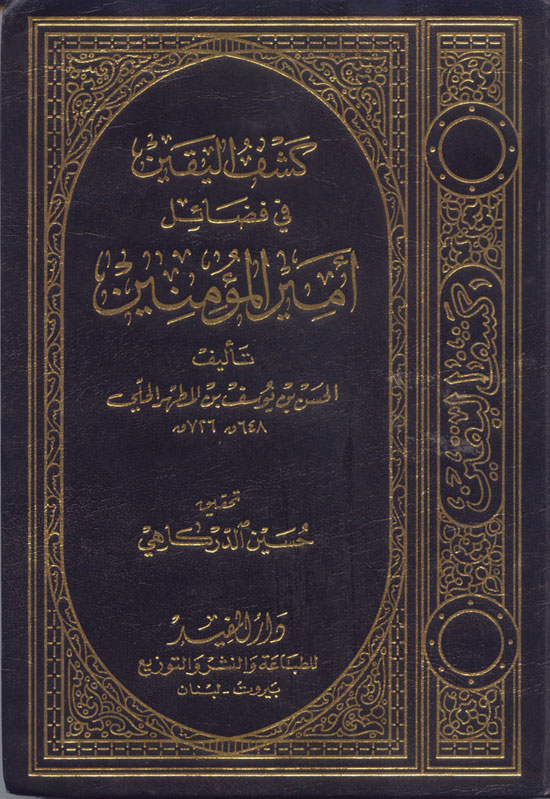 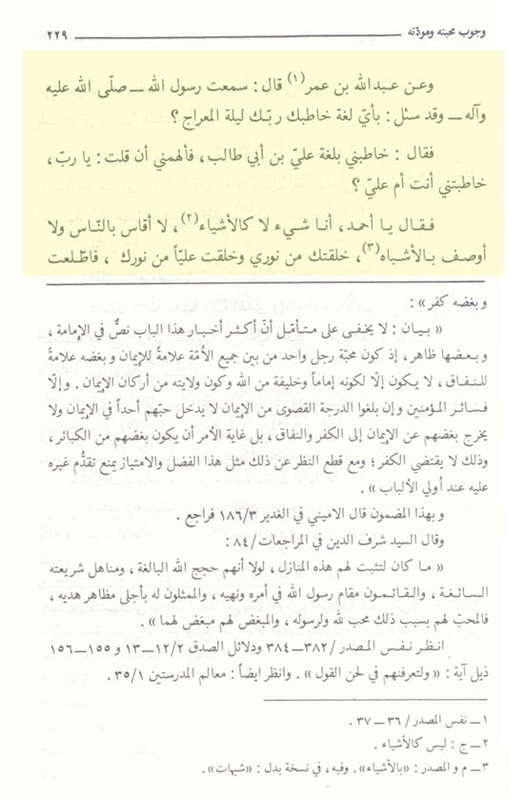 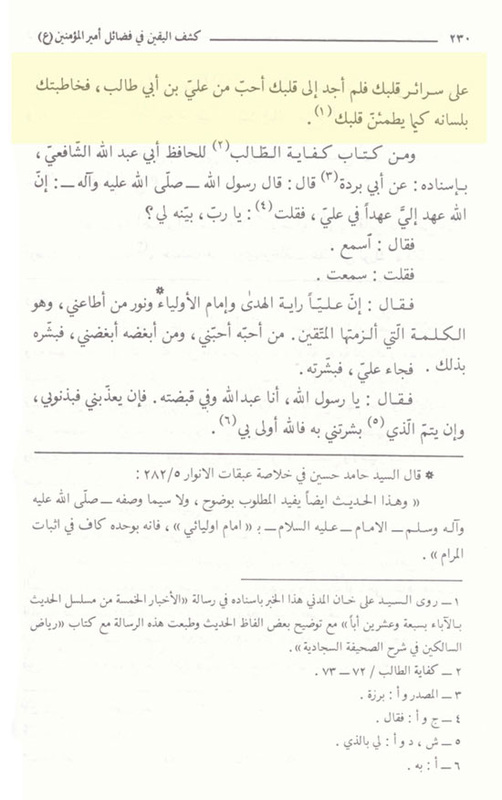 Secret within secret in the religion of Shiism – Imamate


From shia books which say that to understand Imamate is not easy and it was secret concealed in a secret. This speaks of the real creed of shiism which are kept in a secret upon secret and concealed which no one knows except the shia elite and their majoos priest/ ayatollat.

We do wonder that upon this secrecy it contradicts what had been revealed about Ghadeer Khum and how it was publicized which shias used to counter sunnis arguments.

What shias fail to realized that with this hadith about Imamate being in secret the very foundation of Ghadeer Khum collapse within shiism.

It was reported by Muhammad ibn al-Hasan as-Saffar in “Basair ad-Darajat” (p 48) from Abu Abdullah (alaihi salam), and also in “Sahifa Abrar” (2/200) by Mamiqani: 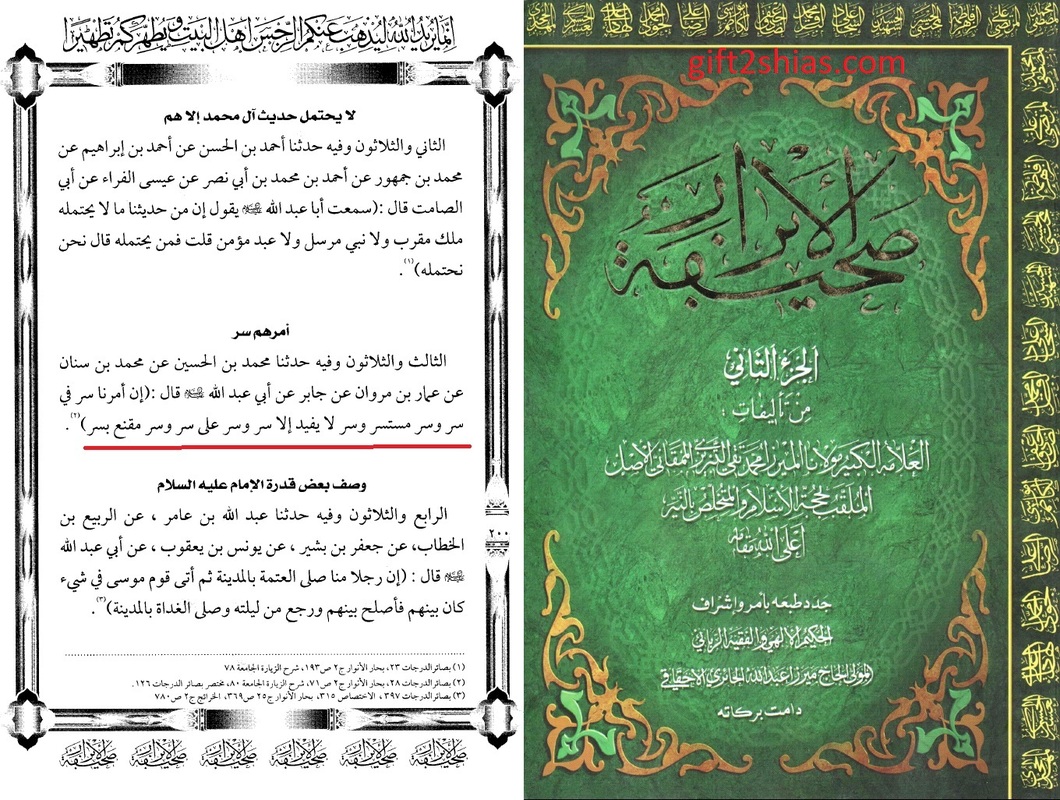 
Khomeini’s Kufr Belief : Imaan of the Sunnis is invalid, because belief (Iman) which does not take place except for with the Wilayah/Imamat of Ali and his pure infallible successors

Khomeini’s Kufr belief on Wilayah/ Imamat and the invalidity of Sunnis Imaan. 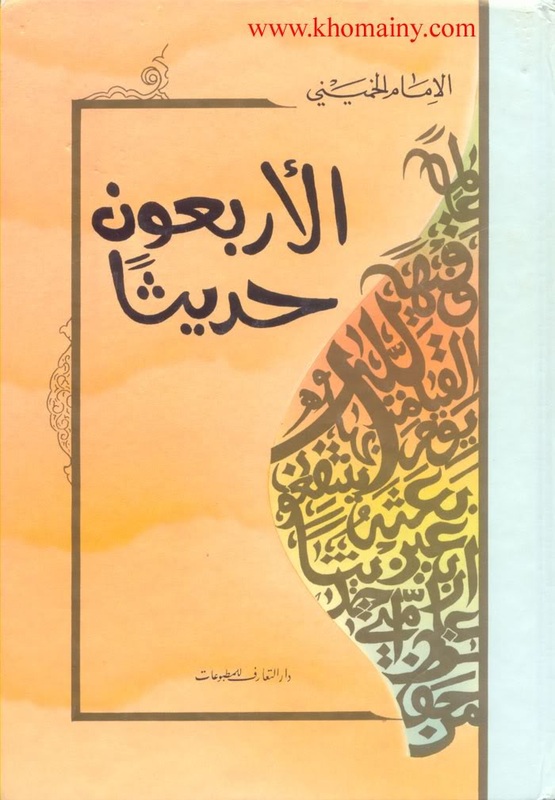 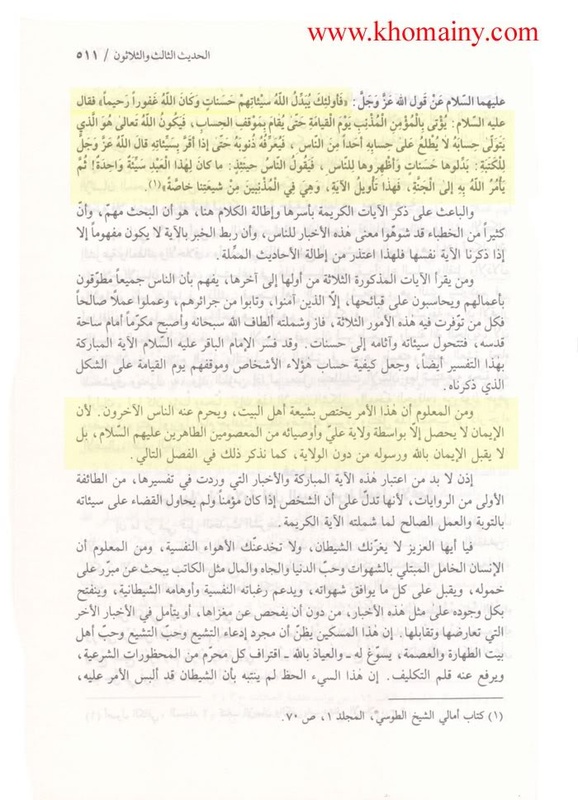 From the Sheikh in his Amali with its Isnad from Muhammad bin Muslim al thaqafi he said: I Asked abu Ja’afar bin Ali PBUT about the saying of Allah ((for God will change the evil of such persons into good, and God is Oft-Forgiving, Most Merciful,)) [Furqan: 70]

So the Imam PBUH Said: The Sinful believer shall be brought to judgement on that Day, So Allah would be the one to judge him and none of the people shall witness his judgement, Then Allah informs him of his Sins and when he admits to his sins Allah would say to his writers: “Change them to Rewards(Hassanat) and Show them to the people”

Then the people say : “Does this slave not have One Sin !?” Then Allah orders that he be taken to Jannah, So this is the Ta’aweel (meaning) of that verse and it is exclusive for our Shia.

The Imam Khomeini in is commentary on the hadith says:

And it is well known that this matter is exclusive to the Shia of ahlulbayt and that it is forbidden for all those besides them. Because belief (Iman) which does not take place except for with the Wilayah/Imamat of Ali and his pure infallible successors PBUT, In Fact The Belief (Iman) in Allah and his messenger Is Not Accepted unless it is accompanied by the (belief in ) Wilayah, and we will mention this in the second Part.


Ayatush-shaytaan Khomeini : All the atoms in the universe humble themselves before the twelve Imams and it is one of the essential beliefs of the Shī‘i school that no one can attain the spiritual status of the Imāms, not even the cherubim or the prophets!

This pagan’s Tawheed is as monotheistic as the Tawheed of the Hindus und Qurayshi Mushriks back then (i.e. Rafidi Shi’ism does not fulfil the Tawheed Uloohiyyah (Uluhiyyah – Oneness of Allah, that’s what all religions and cults lack, yet Rafidi Shi’ism even lack the Tawheed Rububiyyah i.e. LORDSHIP.) 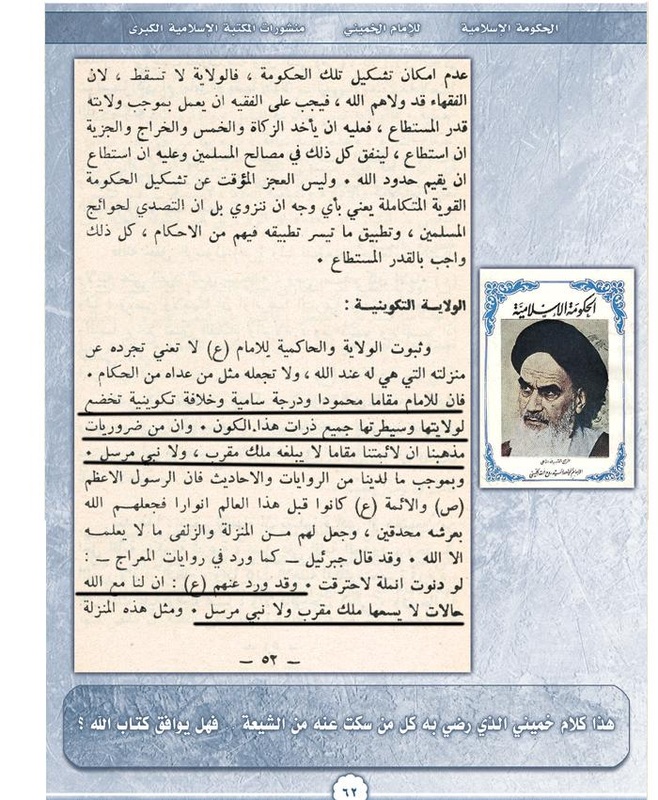 It is a viceregency pertaining to the whole of creation, by virtue of which all the atoms in the universe humble themselves before the holder of authority. It is one of the essential beliefs of our Shī‘i school that no one can attain the spiritual status of the Imāms, not even the cherubim or the prophets.

In fact, according to the traditions that have been handed down to us, the Most Noble Messenger and the Imāms (‘a) existed before the creation of the world in the form of lights situated beneath the divine throne; they were superior to other men even in the sperm from which they grow and in their physical composition.

Their exalted station is limited only by the divine will, as indicated by the saying of Jibrā’īl (‘a) recorded in the traditions on the mi‘rāj: “Were I to draw closer by as much as the breadth of a finger, surely I would burn.”

The Prophet (s) himself said: “We have states with God that are beyond the reach of the cherubim and the prophets.”

- Pure Zandaqah (heresy), but are his blind followers going to ponder over it?